Chasing a monster Bull Moose in the mountains of Alaska is as good as it gets for any big-game hunter. Their body size and antler mass is amazing. The bright fall colors, the crisp air and snow-topped mountain peaks never leave your mind. It was that time of year again, and as the Super Cub warmed up, we made our decision on our destination and loaded the gear. We once again were packing light and hoping to come out heavy. We were going to try to take a big bull with the bow. Tok Air was our transporter and we knew we were in for an awesome hunt.

Weather was cooperating and we went airborne. I was hunting with good friend Mike Coppens, a former football player who gets confused a lot of the time, so I knew he was going to be a good packhorse on this hunt. Once we landed and got all our gear organized, we headed up and over the mountain to get into trophy moose country. We worked hard, hiking and packing our gear to the top of the ridge where we could see for a long distance. We got camp set-up and gave a few cow and bull grunts before dark, though we did not see much around and were hoping morning would bring a few bulls closer to camp.

We woke to sunshine and frost on the tents. Glassing and calling for a few hours, it did not take long to find an old bull. He was a good distance away, so we watched him through the spotting scope. I tried every call I had at him and finally got him to start coming our way. The sun just glistened off his antlers like yellow gold. He was coming right towards us, when all the way across the valley, we noticed another bug bull charging towards us. Things were getting interesting.

Mike grabbed his bow and we took off down the mountain to cut these tanks off. The brush took us longer than we hoped to navigate through and the two bulls met at the bottom of the valley. Huge white palms started smashing together. It was an all-out battle for 20 minutes. We knew this was our time to get in close for the shot. Mike worked his way within 50 yards as they battled it out. Pushing, shoving and grunting, mud flew and the brush rattled like a windstorm. The echo from their antlers could be heard throughout the valley. The brush was tall and thick and Mike sat there for 30 minutes waiting for a shot, but just could not get an angle through the brush. He was enjoying the show that few have ever seen while hunting.

I felt the wind switch and knew it was not going to be good. The bulls stopped fighting and looked right in our direction. Game over; they stormed off. With two growing boys at home, I need to make sure the freezer is full. I could not allow both big bulls to get away, so I took off after them and was able to make a long shot on the big old bull with my Blaser. I dropped him with one shot with a .300 Win Mag. Monster bull down! 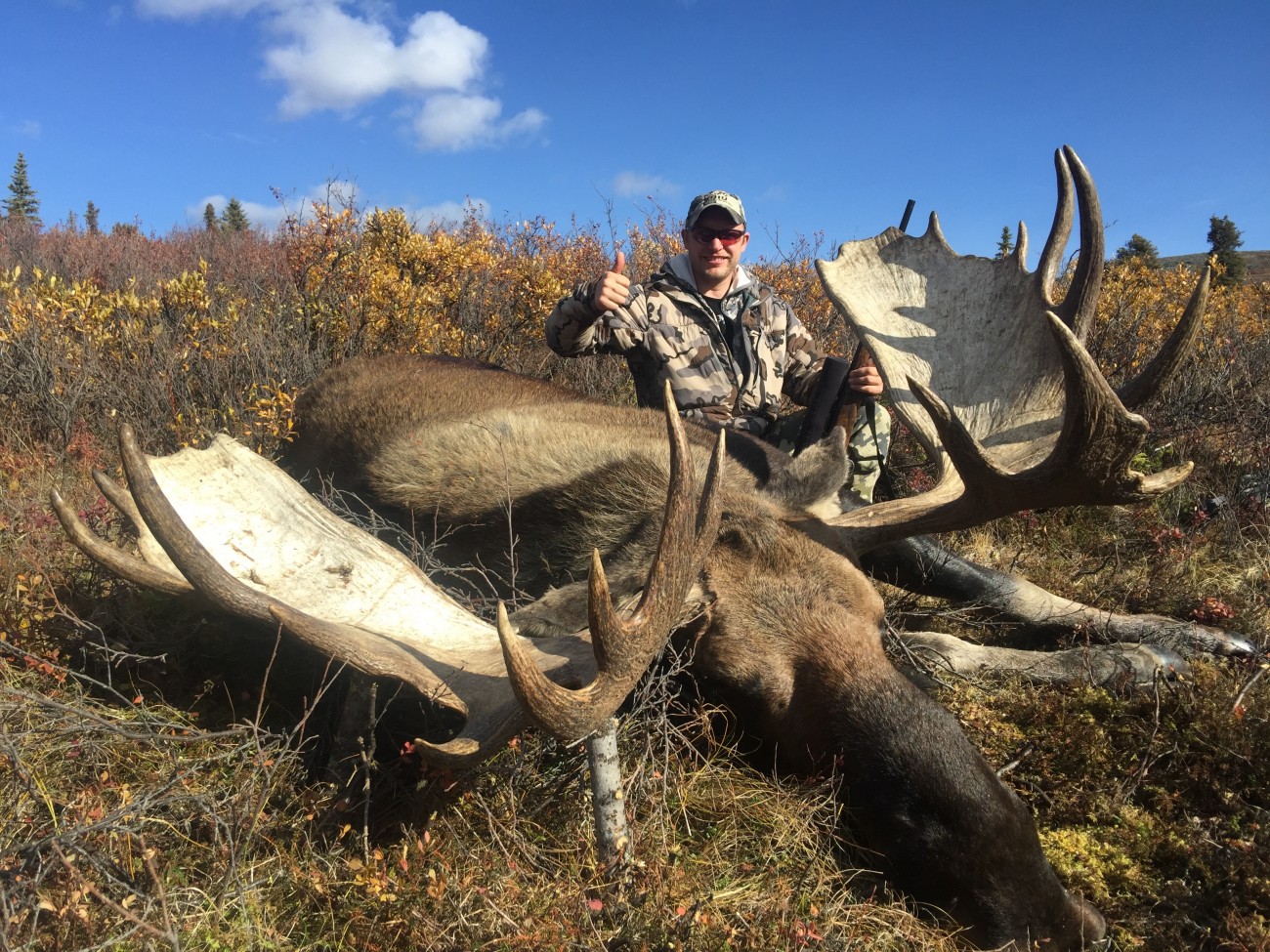 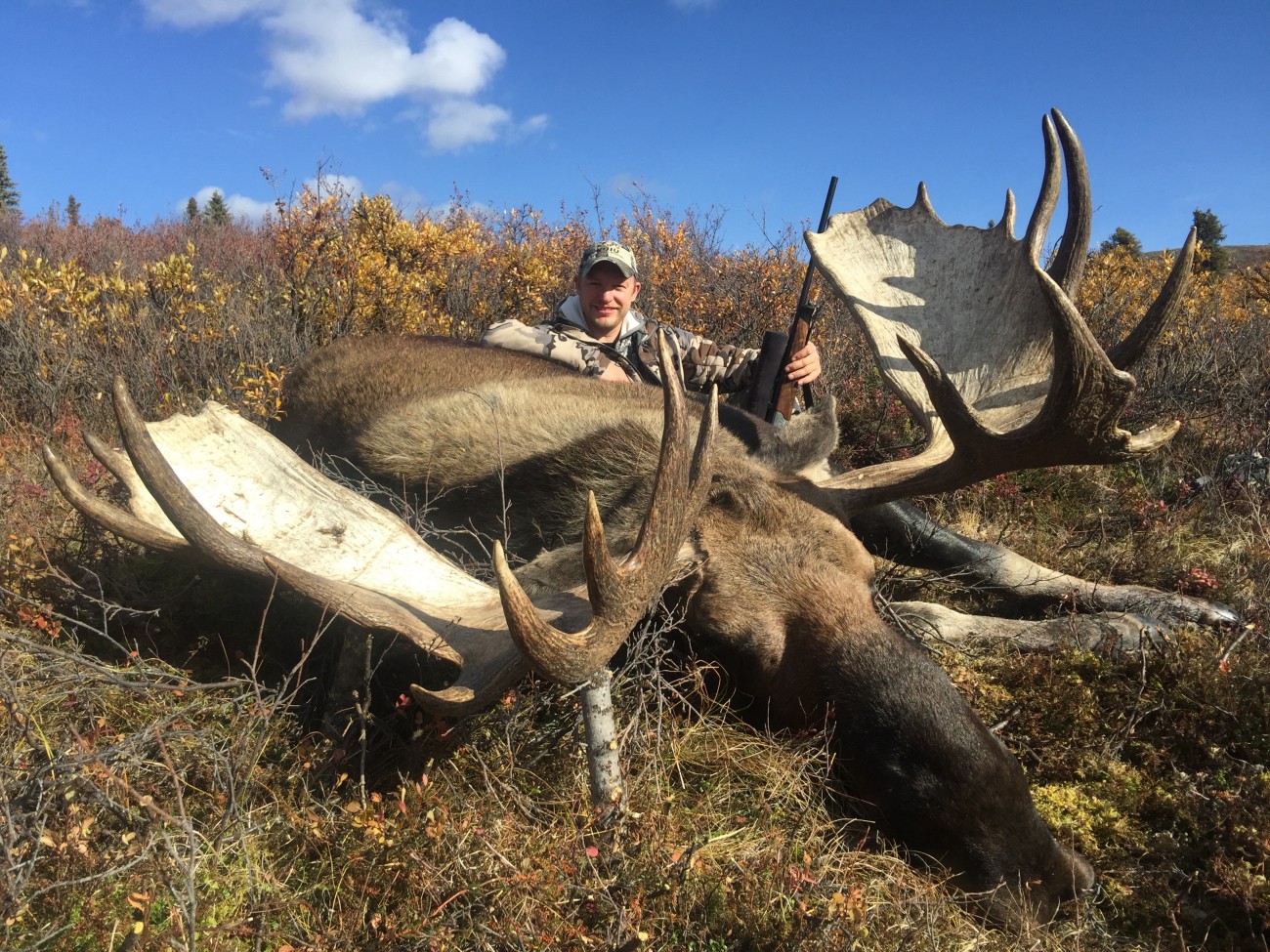 With any moose hunt the work begins when the trigger is pulled. With all the excitement, we managed to get a lot farther from camp than we would have liked. This seems to be pretty easy to do when hunting moose. This means a lot more work and packing up vertically and over a mountain. With fresh bear sign in the area, we knew we had to get the bull cut up and at least packed up to the top of the mountain before dark, so we could keep some kind of an eye on the meat. This is where the football star really showed his merits. He grabbed a whole hindquarter from one of the largest bodied bulls I have seen and started packing straight up the mountain. We packed meat into the dark but managed to get the bull to the top. About halfway from the airstrip, we felt that was pretty good for a day's work. 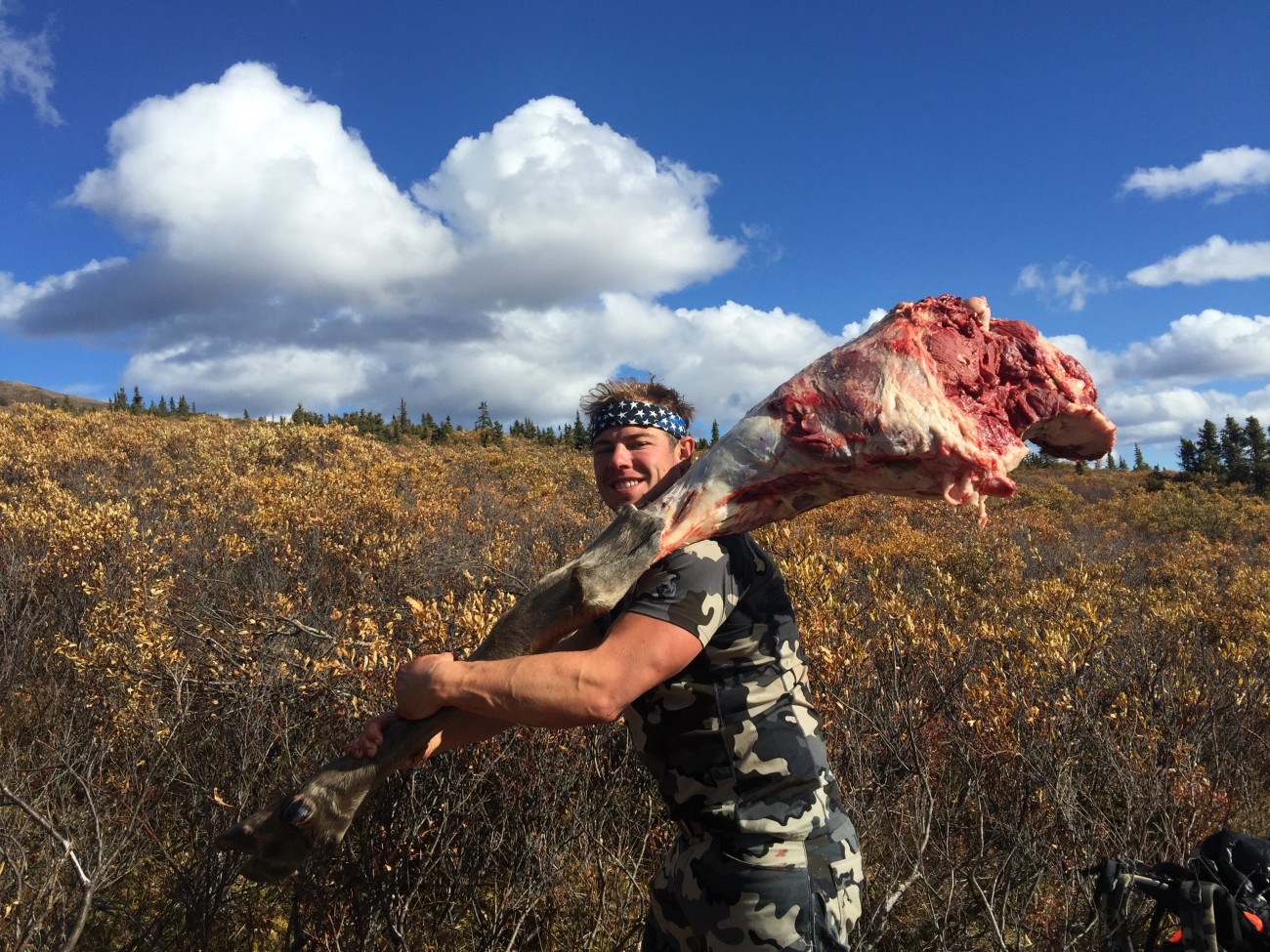 The next morning we continued to call and rake the brush in hopes of calling in another bull for a chance to get an arrow into him. We spotted a long-tined, wide bull on the other side of the drainage and decided we needed a closer look. We sat on this bull all day trying to call him in but he never moved.

Patience is key while moose hunting: Keep calling and glassing and eventually something should turn up. Even the unexpected, like spotting another big bull over two miles away that was walking in our direction. We kept calling and he started coming towards us but we lost him behind the mountain and into the brush. As we waited for the other bull to get up and move, we heard another grunt coming right up the valley. Here came the old bull up the creek bottom. It was unreal we could call this animal in from such a distance but he was coming in hot. We split up and I continued to call while Mike got down in the willows to try to get in front of the bull. He had four huge brows on each side, some of the biggest I've ever seen. He was coming for us like a rocket, was just like one of those Jim Shockey videos we all watch in the off-season. The big bull held up, and I was waiting for an arrow to fly, but nothing was happening. The bull had me pinned down and I could not move so I just kept giving off soft cow calls; he finally turned enough for Mike to let an arrow fly and make a perfect shot. The big bull ran about 60 yards straight uphill and died in the thickest alder patch you could imagine. Mike's dream had come true and the big bull was down. Once again, we found ourselves getting to the bull at dark and got him opened up and cooled off for the night. We then started the two-mile trek back up the mountain to our tents. This time we had water and a Snickers bar, but were too beat to even thing about making dinner. 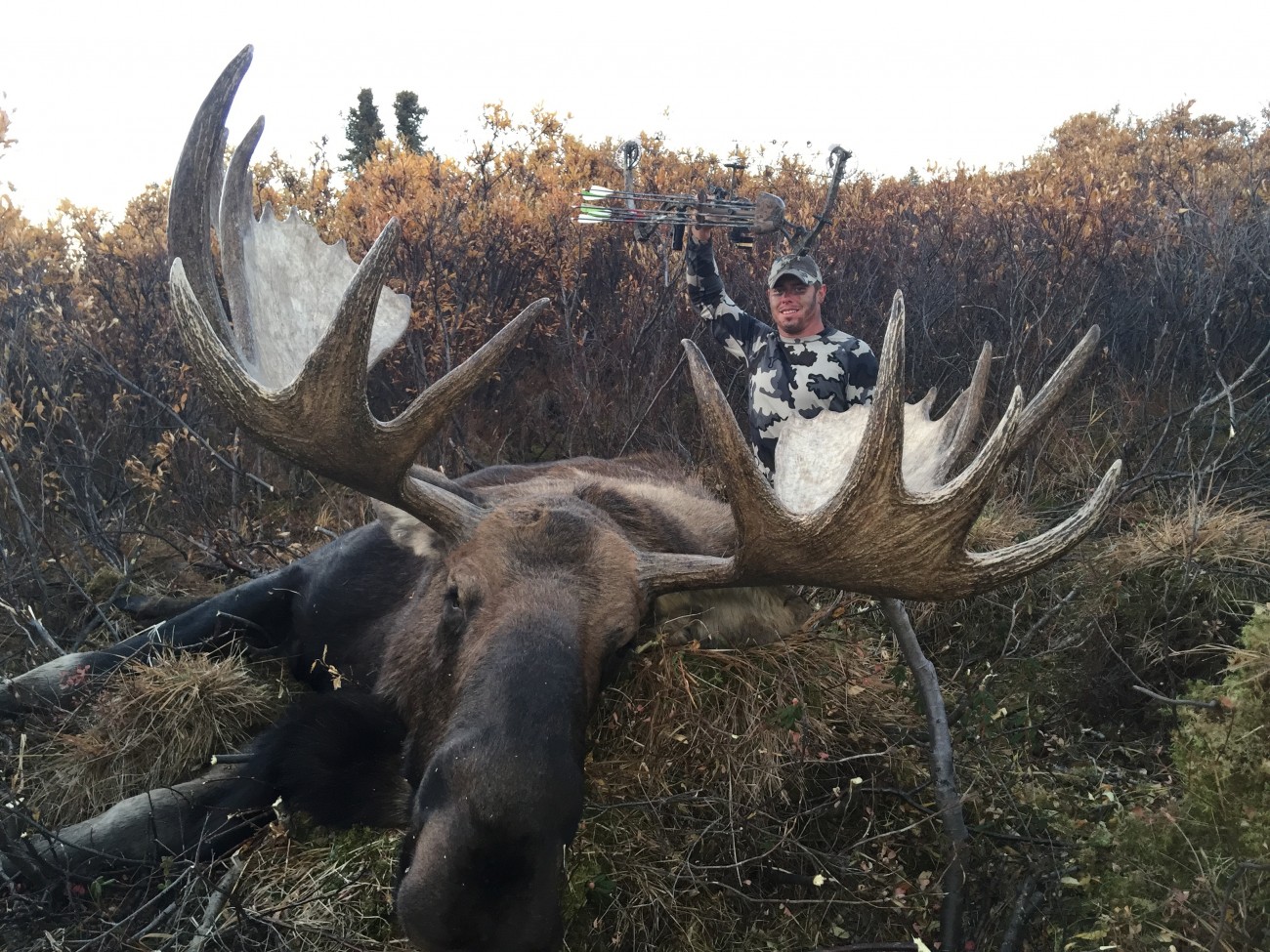 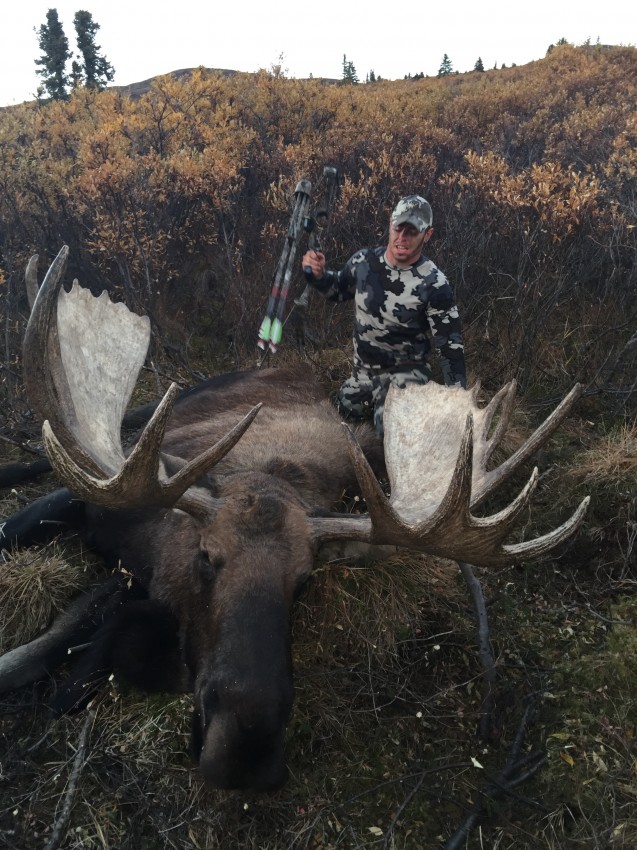 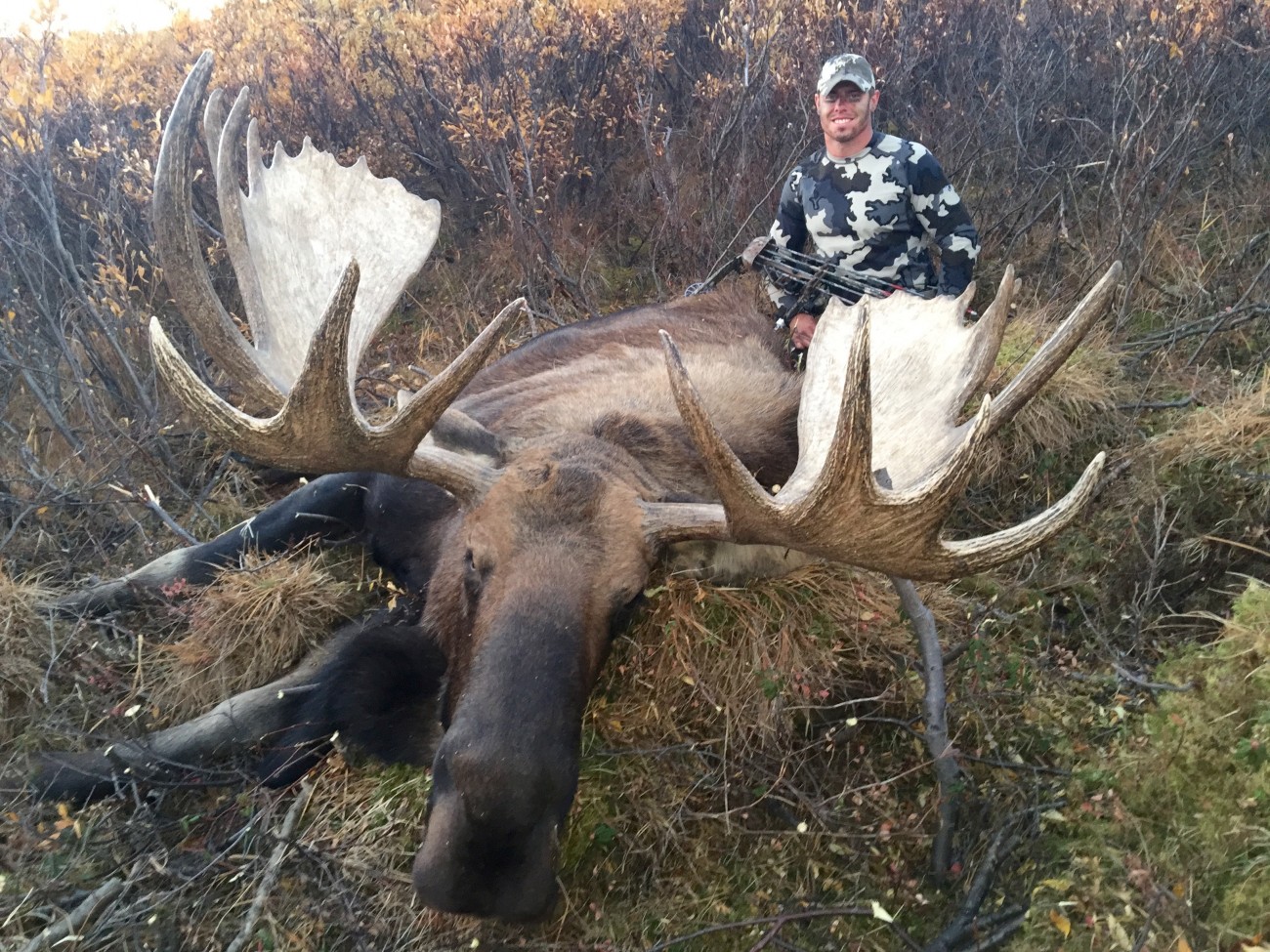 The next three days were filled with wet sore feet and heavy loads of meat. We pounded our Kuiu 7200 Icon Pro Packs, which held up very well and the meat hauler attachment worked great. It also really helps to have a beast of a packer when you decide to drop a moose a long way from the strip. We usually try to set a range and stick to it, but sometimes the extra work will equal great success. 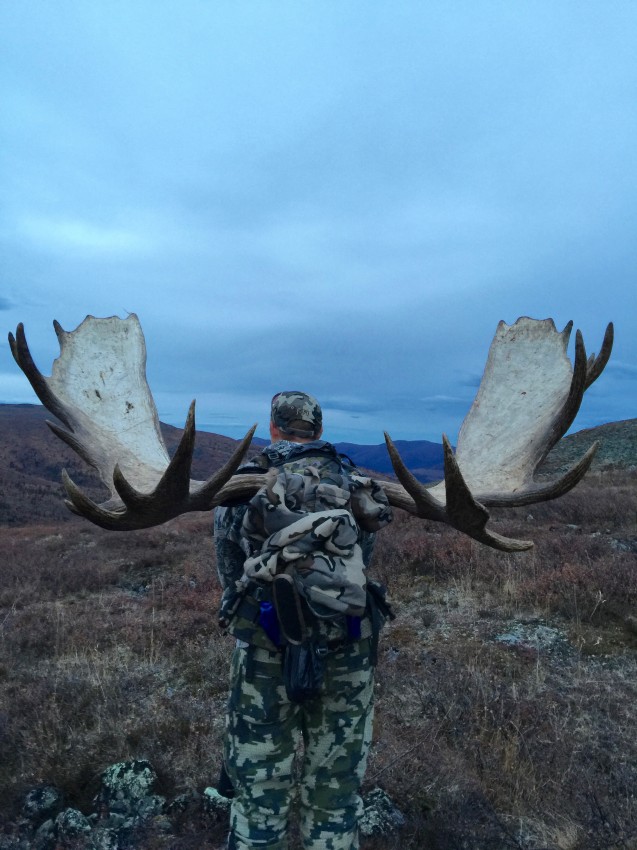 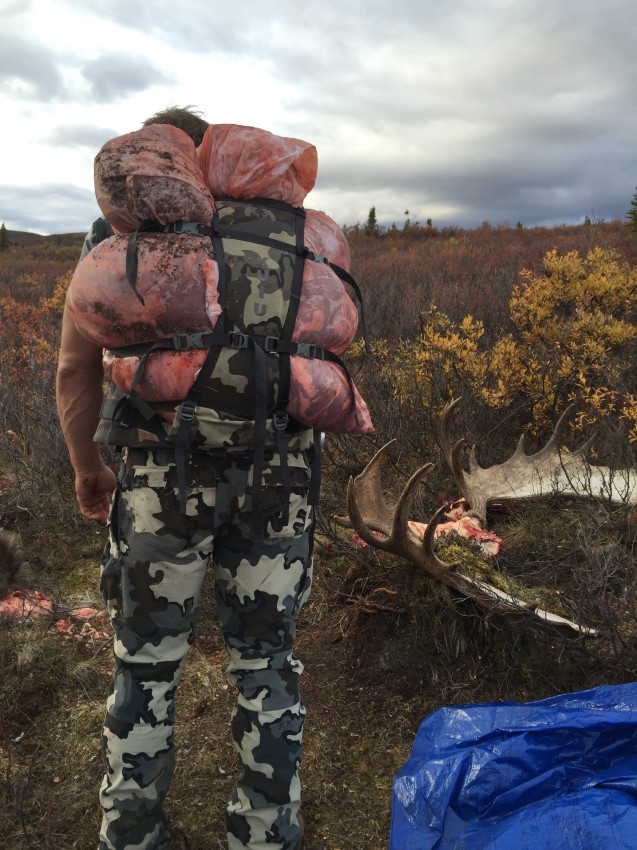 Backpacking moose hunts are all about work, and the harder you work the more memorable trip it will be. Taking your time, calling and being patient are also keys, but once the bull is down the memories will be embedded with sweat. Give Zach at Tok Air Service a call if you want to hunt moose, bear, sheep or caribou. He will get you deep into the Alaska wilderness, where some true trophies are holding in the brush.