A remote Alaskan experience unlike any other

Dall’s Sheep (Ovis dalli dalli) inhabit the mountain ranges of Alaska. These white creatures are most notable for the males’ massive curled horns. Females (known as ewes) also grow horns, but there are shorter and more slender, and only slightly curve. Rams tend to resemble ewes and remain in ewe groups until they reach two years of age. After that, continued horn growth makes the males easy to recognize. Horns grow steadily during spring, summer and early fall. In late fall or winter, horn growth slows and eventually stops. This start-and-stop growth results in a pattern of rings, called annuli, which are spaced along the length of the horn. A sheep’s age can be determined by counting the annuli. Rams are considered old at about 12 years, although reams as old as 16 have been harvested on rare occasion. Ewes have been known to reach 19 years but their ability to reproduce diminished at about 13 or older. For more information on basic Dall’s sheep biology, visit the Dall Sheep Species Profile at http://www.adfg.alaska.gov/index.cfm?adfg=dallsheep.main. 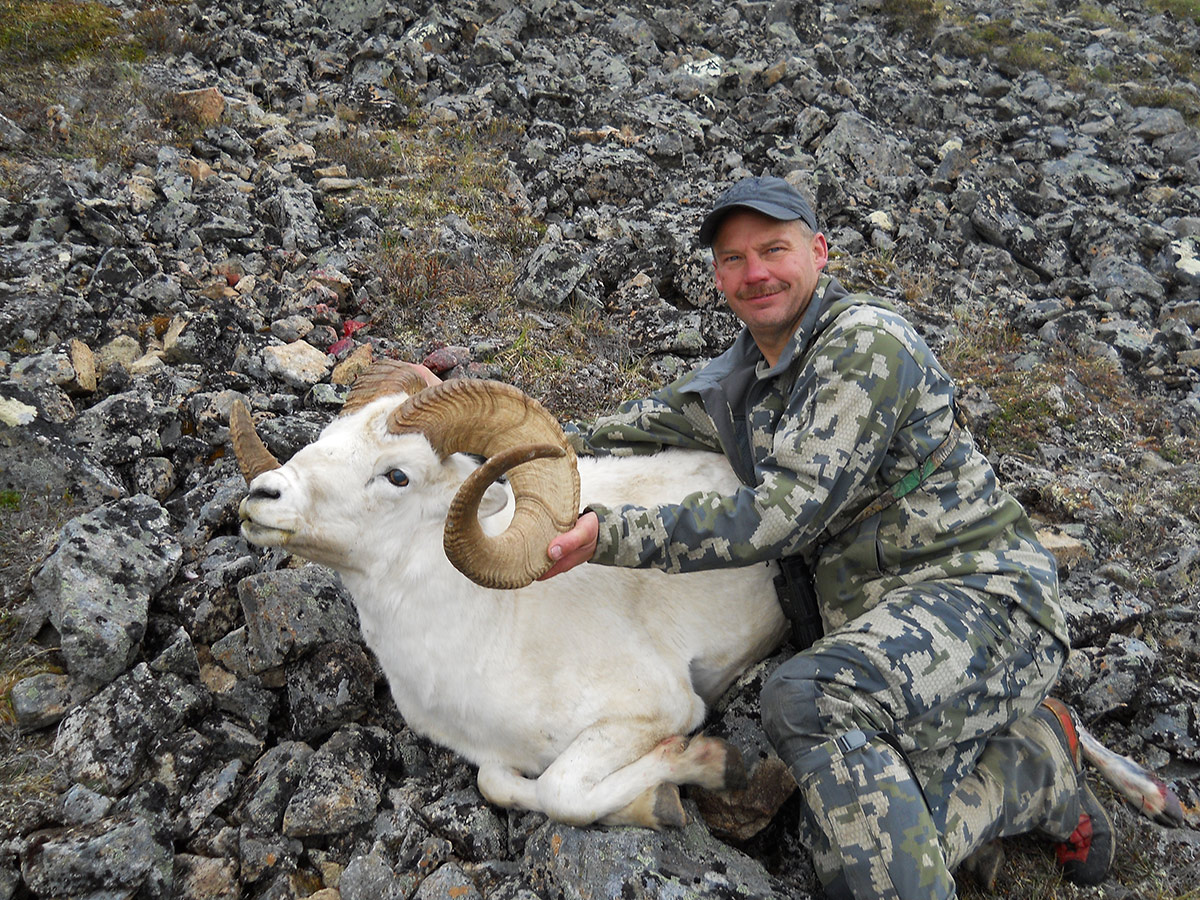 Dall’s sheep are found in rugged mountains throughout Alaska and western Canada (see map on page 3). They are generally high country animals but sometime are found below timberline. Dall’s sheep are found in relatively dry country and frequent a special combination of open alpine ridges, meadows, and steep slopes with extremely rugged escape terrain in the immediate vicinity. When danger approaches they flee to rocks and crags to elude pursuers. They use ridges, meadows, and steep slopes for feeding and resting. In winter they rely on areas of dry, light snow that is blown away by winds to reveal underlying vegetation. Because winter habitat is limited, winter hope ranges are generally smaller than summer home ranges. The extent and location of winter habitats largely determines seasonal movements of Dall’s sheep. Winter range food availability is likely a limiting factor in sheep populations. 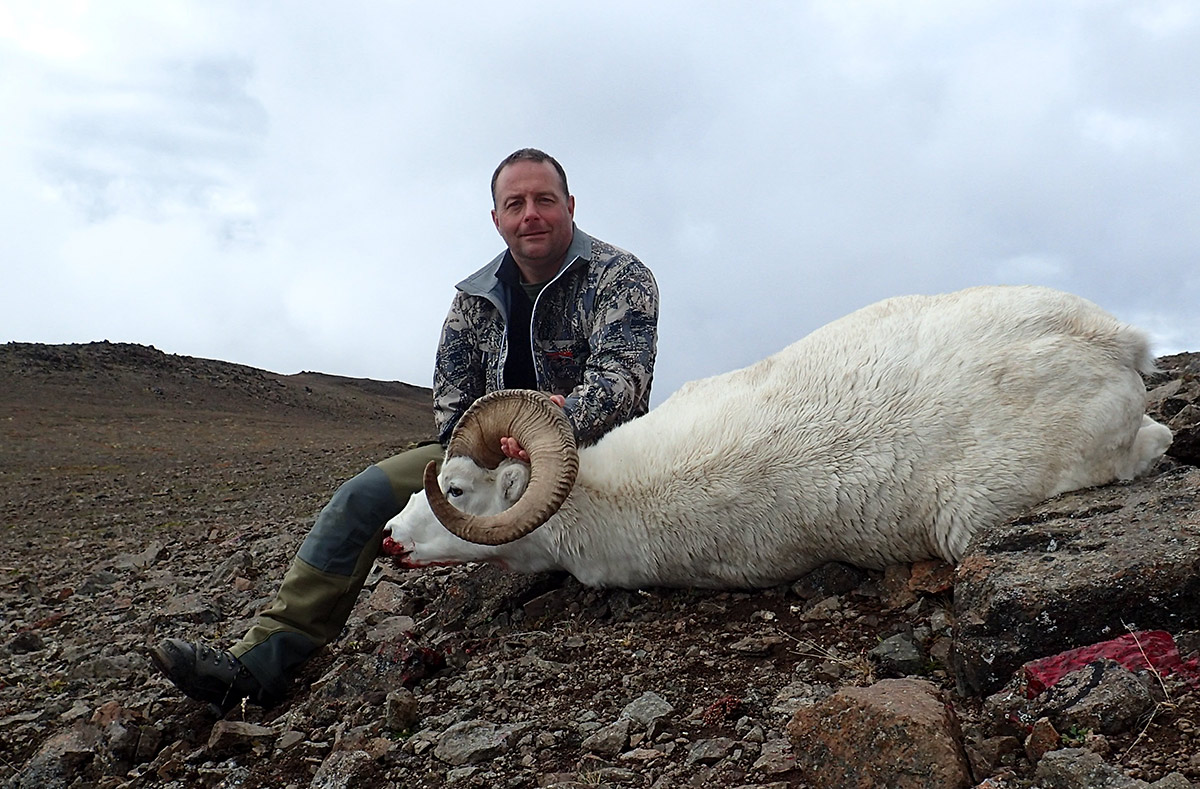 Dall’s sheep are primarily grazers and utilize a wide variety of alpine forbs, grasses and sedges. Their diets vary seasonally and by location. During summer, food is abundant, and the sheep consume a wide variety of plants (research on diet shows that some populations of sheep utilize more than 100 species of plants). Their winter diet is much more limited and consists primarily of dry, frozen grass and sedge stems available when snow is blown off the winter ranges. Some populations eat significant amounts of lichen and moss during winter. Many Dall’s sheep populations visit natural mineral licks where they obtain essential mineral nutrients, especially during the spring.. 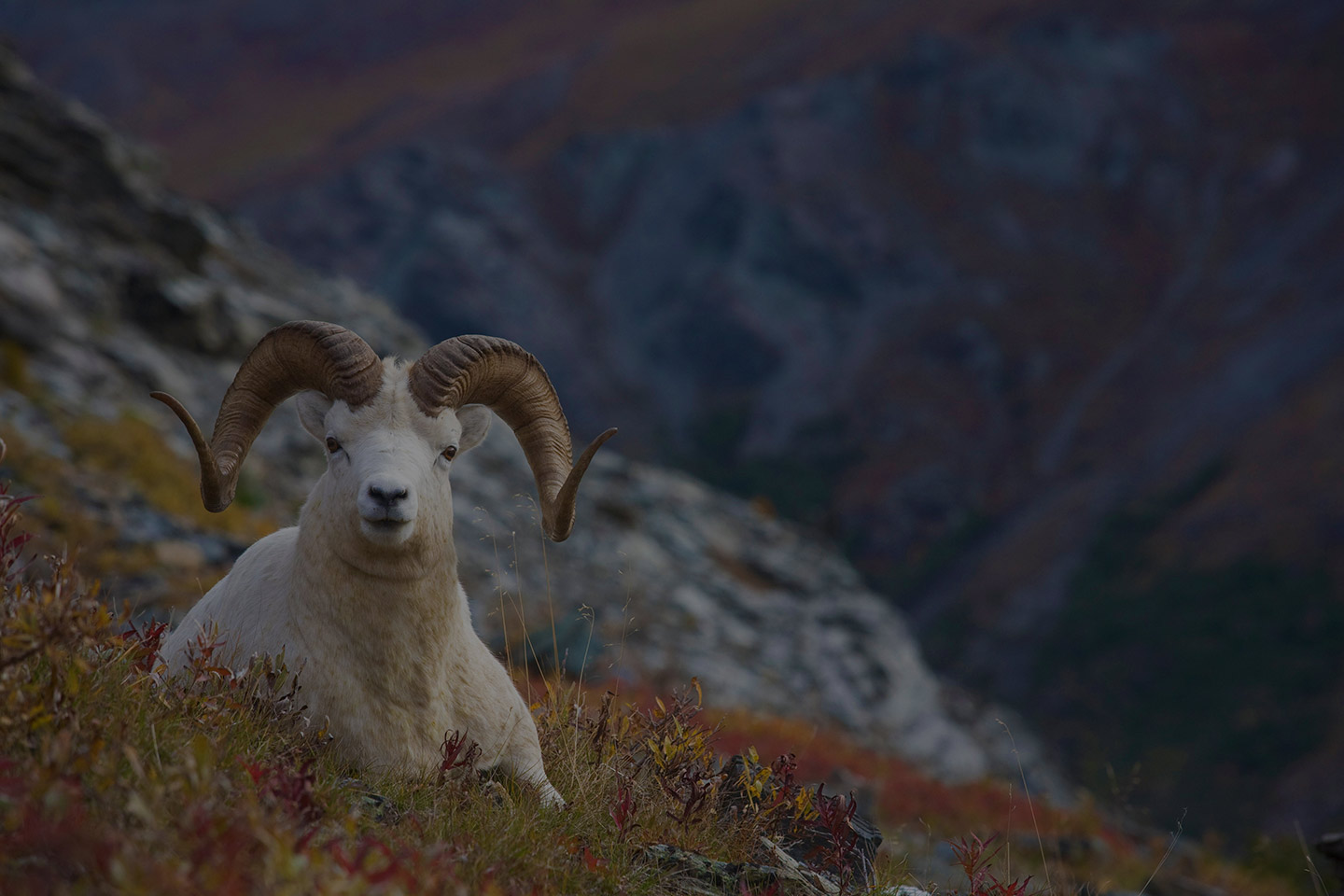 Lambs are generally born between mid-May and mid-June. As lambing time approaches, ewes seek solitude and protection from predators in the most rugged cliffs available. Lambs have a fully functional rumen by midsummer and begin feeding on vegetation within a week after birth but many ewes still nurse lambs into the spring of the following year. Ewes typically have their first lamb at three or four lamb’s life are precarious. About 50percent of lamb mortality occurs in the first 30 to 45 days of life when they are most vulnerable.

Adult rams live in bands which remain segregated from ewe groups for most of the year. They interact during the rut which occurs from mid-November to mid-December. The horn clashing that rams are so well known for is not a result of fighting over ewes, but is a means of establishing dominance hierarchy among male sheep. These clashes take place throughout the year on an occasional basis, but occur more frequently just before the rut when rams are moving among the ewes and may meet unfamiliar rams of similar horn size.

Climate change has the potential to affect sheep populations in Alaska and is likely already having an effect on their population dynamics through changes in alpine vegetation and snowpack. Dr. Roman Dial, a biologist at Alaska Pacific University, has documented that shrub and brush lines have advanced up to 300 vertical feet into sheep habitat in alpine tundra over the last 50 years in some locations in the Kenai and Chugach mountain ranges. As dwarf birch and alder replace the succulent forbs, grasses and sedges that sheep depend on for food, the carrying capacity of summer habitat may be decreasing. Warmer, drier summer conditions may also result in decreased forage quality of the same grass and sedge species, which may mean that ewes are getting less food of lower quality overall and are in poor body condition going into winter. This may mean that they are unable to get pregnant, or one pregnant, they may be unable to carry the developing fetus to term. Decreased pregnancy and birth rates well lower the recruitment rate, which is defined as the number of young animals entering the population.

Changes in winter snowpack, snow density, snow water content, rain on snow events, icing and snow persistence will also influence sheep foraging ecology and have great potential to decrease the carrying capacity of winter range. Wet, heavy snow will not be transported by wind as light dry snow is; and ice layers, crusted, or dense snow can made it difficult or impossible for sheep to use their hooves to dig to expose forage – a behavior called “cratering”.

Climate also plays an important pole in the dynamics of disease in wildlife, including Dall’s sheep. Warmer winters may allow parasites or disease to have a greater effect on sheep populations. Also, wildlife species not currently present in Alaska could arrive due to range changes, possibly bringing diseases with them from other locations.

Research into the effects of climate change on sheep is already underway; ADF&G researchers are collaborating with Dial to study the impacts of climate change and alpine environmental factors on Dall’s sheep populations. This work may have important ramifications for future sheep management.

Research indicates that weather is among the most significant factors affecting sheep populations. Dall’s sheep have a limited amount of time to acquire food necessary for reproduction and overwinter survival. To maximize protein intake during short summers, sheep select vegetation in early growth states when protein and digestibility are high. In northern latitudes, mountain sheep are generally limited to foraging areas with snow depth less than 12 inches during the winter – patterns of diet selection can be affected by as little as 4-6inches of snow. Cold springs with persistent snow and late storms can have a big impact on sheep populations by reducing the number of surviving lambs while also killing older sheep. One or more years of poor lamb production can cause a steep decline in the population.

Just as there are bad years when harsh weather events have an impact on various animal populations, there are also good years where weather conditions favor survival. If a sheep population experiences a series of good years the population can grow because lamb survival increases and mortality decreases. Older animals that would have died in a typical winter may survive. During these times a population can grow substantially as seen in the population of the Denali National Park area (then-called Mt. McKinley National Park) during the mid-1940s to mid-1950s. However, when a normal or severe winter occurs, the lamb survival will immediately drop and the older animals will also die. This can happen quickly and does not mean the population is declining; it may simply be returning to a more standard population level.

Full-curl management is intended to preserve sheep hunting opportunity while conserving sheep. Limiting harvest to older full-curl rams ensures that the population’s productivity is not affected by harvest. Compared to the harvest of older ungulates, the harvest rates of sheep in Alaska are low and expected effects of human take on sheep populations is accordingly, negligible.

The primary reason that the regulation eventually ended up at full curl, however, is that some influential hunters and guides wanted bigger sheep on the mountains. There has also been an ongoing, inaccurate perception that too many rams are being harvested.