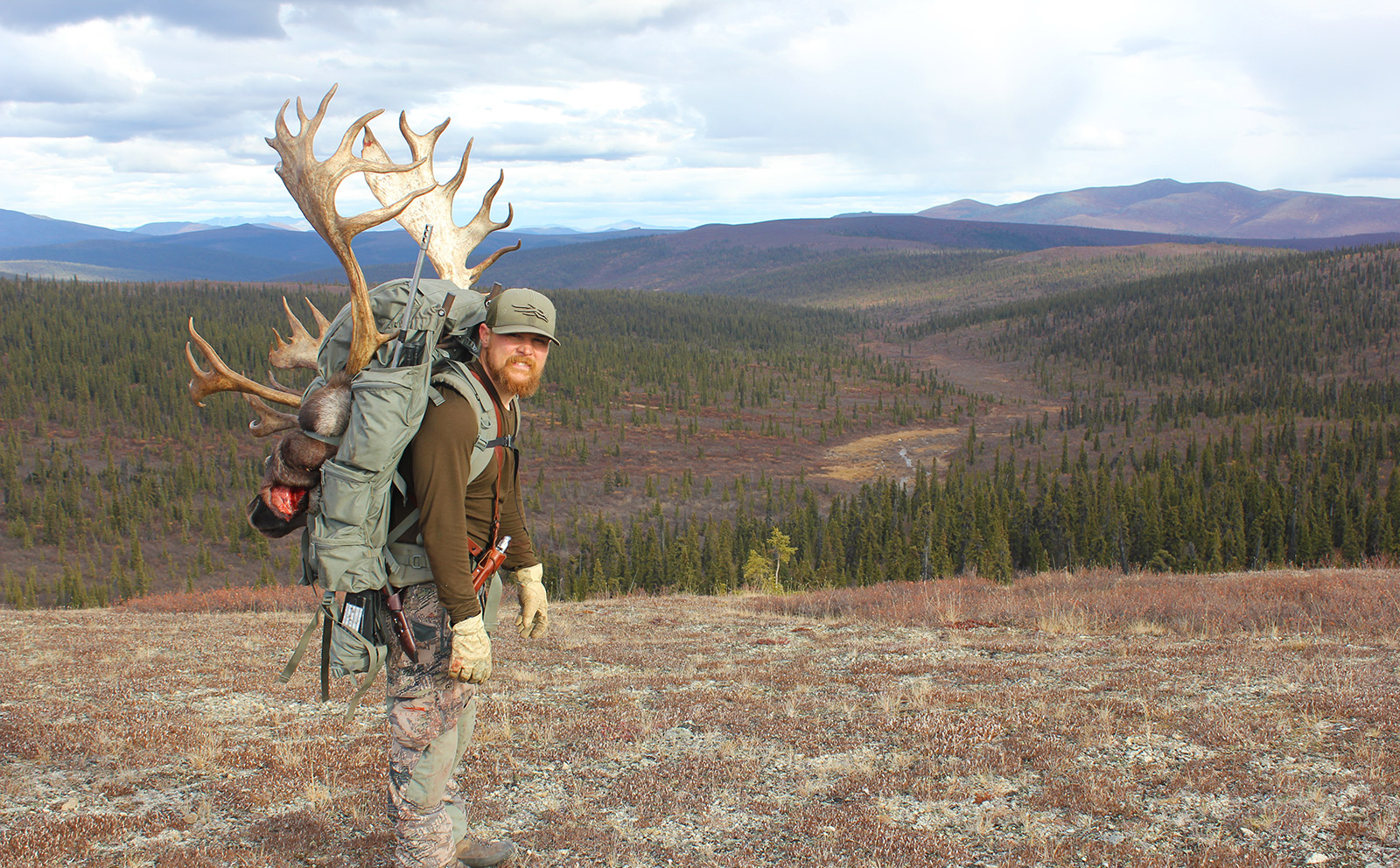 A remote Alaskan experience unlike any other

A Historical Look at the Herd

As with most herd animals, there have been drastic changes in both the size, make-up and range of the Fortymile caribou herd. The Fortymile herd is often defined by and known for its extreme declines. From its peak in the early 1920's of almost 260,000 to its bottoming out in 1973 to only 6500. At this low point in the herd's history, almost 90% of the herd's range was simply abandoned. These areas include the accessible areas along the road system of the Steese Highway just north of Fairbanks.

According to research and historic literature, it is believed by ADF&G biologists that there are primarily three factors that have contributed to these drastic reductions. 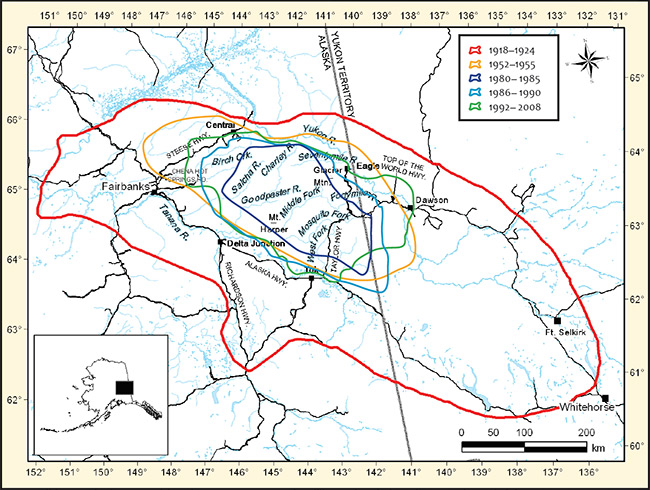 Historically the wolf population has always affected the herd. In the 1920's there was a notable scarcity of wolves in the Fortymile country. A biologist by the name of Adolf Murie spent the winter of 1922-1923 travelling through the winter range of the Fortymile caribou herd. He observed no wolf tracks during any of his travels by sled dog across the interior. Reduction in wolf numbers may be linked to disease spread by sled dogs accompanying the mining industry at the turn of the century. It is likely that had wolf populations in the 1920's remained average that the Fortymile herd would not have increased so rapidly. Similar increases have been seen after the wolf control program of 1975 to 1982 near the Delta caribou herd. This reduction of predators allowed that herd to double their population in only five short years. 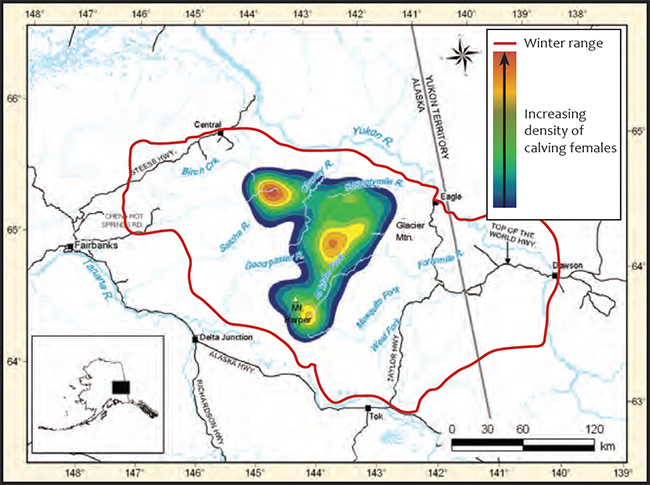 How Can The Herd Grow?

The research of ADF&G biologist Rod Boertje and Craig Gardner has shown conclusively that wolves have been the dominant factor in limited growth amongst the Fortymile herd. From 1994-2003 predator population controls implemented produced two historically rapid increases in the herd's population. The growth likely occurred due to the greatly reduced wolf populations during this time.

Although today's predator control programs are not as extreme in its measures, a reduction in wolf populations seems to be the key to increased caribou populations. These reductions in areas such as calving ranges may prove be the most beneficial since calves killed by wolves is the leading cause of population decline.

Between the years of 1996-2011, a non-lethal control program was conducted on 15 wolf packs that were near the calving ranges of the herd. During this period, the herd population increased by 5-15% annually. In 2005, a lethal wolf control program was established. Since its inception, another 10,000 animals have been added to the herd.

Although this seems like compelling data, biologist cannot conclusively say that these predator control programs were the cause of the great growth. Other factors like easy winters and good weather may have also affected the growth. Information gained from past, present and future research will continue to be the key in evaluating the Fortymile predator control programs and future herd management. 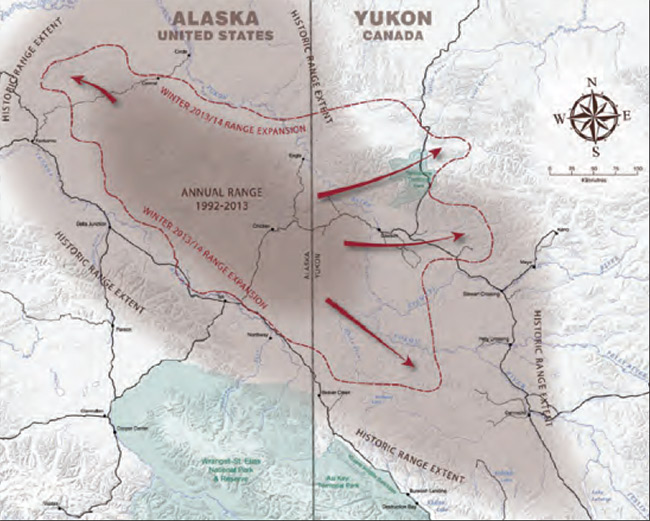 Hunter Sacrifice in the Yukon

Another growth factor that cannot be overlooked is the sacrifice of the Yukon hunters. When the plan to grow the herd was established, caribou hunting in the Yukon effectively closed. Hunters were basically put into a permit hunt system with zero permits available. Although the numbers have increased, the people of Yukon have opted to forego their harvest allocations in effort to allow even more population growth of the herd. The hope is that with this increase in population that the herd will begin to reoccupy most of its former Yukon ranges.

Although Yukon has chosen sacrifice for a time on behalf of the growth of the herd, the Harvest Management Coalition realizes that the future will likely see a resuming of animal harvest. Prior to any harvest resumptions, regulation changes to reopen a hunt will be pursued through consultation with the established co-management process.

The Alaska Board of Game, the Federal Subsistence Board and the Yukon Fish and Wildlife Management Board have agreed to cooperate in managing the Fortymile herd according to Harvest Management Coalition recommendations.

How To Grow A Herd

To promote continued growth and restore the herd to its historic range in both Alaska and Yukon to the extent possible without compromising herd health.ÃƒÂ¢Ã¢â€šÂ¬Ã‚Â This has been the goal of each group since 1995 working to restore the Fortymile herd to its former glory. 1973 saw the lowest point of the herd's population at around 6,000 head. By 1995 there were about 22,000 flourishing caribou. Jump ahead 20 years and we see that the 2010 population has increased to an impressive 51,000. Preliminary research suggests that the herd has remained stable since the last photo census in 2010. Although this has been the preferred method to count herds, new methods were utilized in 2015 to estimate the herd. Results from the latest census is expected to be available soon.

Several techniques have been utilized to accomplish the growth we are seeing. As with any growth, sacrifice is usually required and hunters stepped up to the plate. In 1995 Alaskan hunters only harvested 150 bulls for the year and hunters in the Yukon voluntarily suspended all harvest of the herd. An agreement was reached in 2000 between interested parties in Alaska and Yukon. This agreement established that only 3% of the herd would be harvested per year; 2% for Alaska and 1% for Yukon. Although these percentages still allowed for herd growth, the Yukon hunters chose to return their portion of the quota to allow for added herd growth. In addition to a quota, other factors are affecting the herd's numbers. The on-going wolf control programs that remove wolves from calving and summer grazing areas, good weather conditions since the early 1990's and natural expansion that allows for additional grazing grounds for the herd.

Is There Room For More?

Will the increasing herd outgrow its current range?

It's an important question that was the subject of a research paper produced by ADF&G by researcher Rodney Boertje and others. They examined the Fortymile herd in great depth. The research paper aided wildlife managers and interested parties to answer the important questions about the herd's overall well-being and to aid in continued monitoring and management priorities. The paper covered several key points including;

Although this is a technical research bulletin, the Executive Summary is full of interesting information about the history of the herd and the future management implications. You can find this paper on www.adfg.alaska.gov by searching Management & Research-Publications & Reports-Wildlife- Search Wildlife Publications and search by author's name: Rodney Boertje.

Why is a limited summer range a problem?

A reduction in habitat quality is the main concern with the increasing herd numbers. This is measured in reduced calf weights and less 3-year- old cows calving. The current statistics have incurred concern by managers regarding the herd's nutritional status. Additional long-term information is being collected about the herd's nutritional conditions. For the time-being, biologists are recommending the following cautionary threshold to determine when caribou are overusing their range:

If for the 5 most recent years fewer than an average of 55% of the 3-year- old cows have calves, and the herd has not expanded into new calving and summer ranges, then stabilizing herd growth by increasing harvest to more than 1,000 animals should be consideredÃ‚Â.

These factors are not the only ones that must be considered. In addition to this data, managers also consider harsh weather conditions which can also negatively impact heard growth. This type of factor can cause short-term population stabilization or possibly decline. This has been seen in the winters of 1992-1993 and 2008-2009.

On average, 4-month- old calves have decreased by 0.36 pounds per year between 1990 and 2015. Researchers weigh calves at different times of year, depending on the type of research being conducted. According to research, radio collared 3-year- old cows that gave birth in the Fortymile has shown an overall decline because of the low rates in 2004, 2005, 2009, 2010 and 2014. 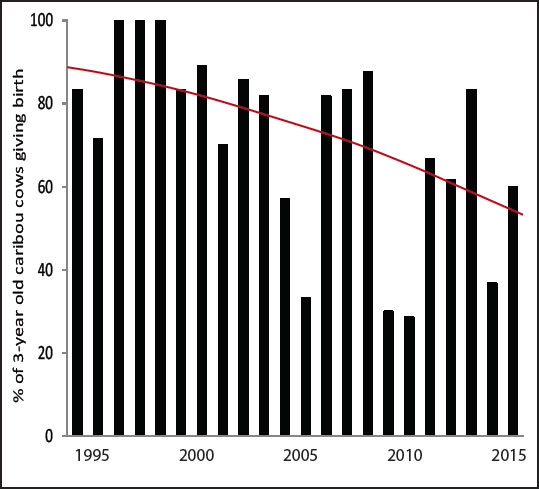 Numbers and Trends are Tracked

Sometimes animals make manager's job easier. During the summer, when caribou are pestered by mosquitos and flies, the caribou try to escape by congregating in areas where they can find relief. These areas can be found on coastlines, windswept ridges and snowfields. It's times like these where researchers can fly over the herd and photograph them. This is where photo-census comes into play. Basically photo-census is a fancy term for photographing the entire herd and counting each and every animal in the photographs. Sounds easy right, but there are many steps that must happen to have a successful photo-census.

A successful photo-census is costly and time consuming. Although the last successful census was in 2010 with at least 51,000 in the herd, a census from 2015 is still being analyzed. The current census appears to show that the heard has been stable since 2010.

For the past 35 years, researchers have employed radio collars for tracking. This technology utilizes aircrafts and radio telemetry to identify collard animals amongst the herd. These tools have revolutionized herd management and led to a greater accuracy in collection of data.

Recently technology has emerged that is gaining traction, satellite collars. Although they are more expensive, they can be utilized without the use of aircraft to locate individual animals within the herd. The collars utilize satellite transmission to track migrations and movements and send the information back to biologists.

It is a fact that herd animals are known for their dramatic population fluctuations and the Fortymile caribou herd is not an exception to that rule. These drastic population changes are just part of the biology of herd animals.

There are many reasons for a population crash amongst a herd. Biologist and wildlife managers must take several factors into consideration when tracking herd populations, these include: 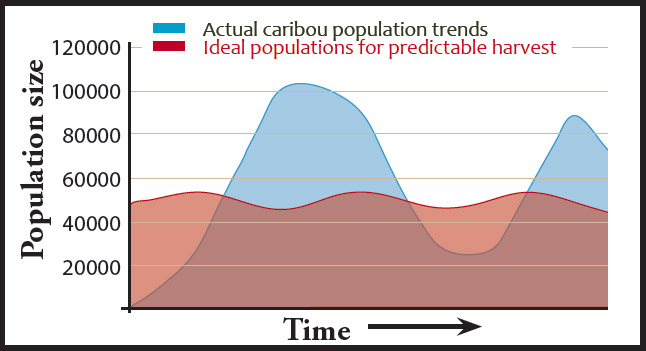 With all the factors that can affect the herd, wildlife managers and biologist work together to increase the herd to sustainable levels. One management strategy is to limit the harvest rates for the herd. Although the current harvest rate is only 1000 animals or 1.6% of the population, as the herd grows and occupies historic ranges, harvest rates can increase. From 1997 to 2010 the harvest rate helped the heard grow by an average of 4.5% per year.

Another strategy enlisted by managers is a short hunt. Caribou tend to do the unexpected at times. Many times large populations of the herd will congregate near the Steese and Taylor Highways. Due to the accessibility of the herd, the potential of overharvesting is much higher. During these years, the harvest quotas can be met or exceeded in a matter of days. To protect the herd numbers long-term, ADF&G will shorten hunts when necessary. The goal is not to inconvenience hunters, but to provide hunting opportunities for users and maintain the balance of the herd population. For 40 years the Fortymile caribou herd has seen steady growth. The efforts and work of many dedicated people have produced the result of growth we are seeing today.

With growth though, comes additional challenges for those who manage these animals. More animals means more opportunities for hunting, which brings more hunters, which can produce crowding and potential for conflict. The largest challenge for game managers is caribou herds gathering on or near roadways during regular hunting seasons.

Although the heard is increasing, research has been showing that calf weights in the fall are down as are the percentages of cows having calves in their third year. Both are indicators of possible nutritional stress. While winter ranges have increased with the size of the heard, research is showing that calving and summer ranges have not been expanding. This produces a higher population densities and could mean overgrazing in the summer locations.

Hunt managers are concerned that if the herd doesn't expand its calving and summer ranges, then measures may need to be taken to stabilize the herd to assure the remaining animals have adequate grazing areas. Research and management will continue to maintain the herd through measurements in size, nutrition, distribution, productivity and survival.